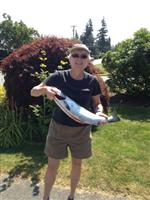 I grew up in Mansfield, Massachusetts and spent summers with my family on Cape Cod. I attended McGill University in Montreal, Canada and received my BSc degree in Biology in 1980. After working as a research technician in Boston for a year, I was accepted into the University of Washington's graduate program in Oceanography in 1981. While at the UW, my research centered on how food produced in surface waters is transported to the deep ocean floor. Cruises on the R/V Thomas G. Thompson to Hawaii and the Gulf of Alaska were a highlight of my master's degree program. After graduate school, I spent several months in the Bering Sea as a fisheries observer on Japanese fishing trawlers. I was hired in 1986 to teach science at Everett High School. This year, I teach Chemistry and Physics in the Universe.

When I'm not working, I like to hike, ride my road bike, cruise on my standup paddle board and play the ukulele. I have a 12 ft rowing dory called Kestrel, and I use it to explore Puget Sound. During vacations, I enjoy visiting my family in Massachusetts and South Carolina. Other places I've visited include Nova Scotia, Costa Rica, Mexico, England, Wales, France, Scotland, Spain, Portugal, and the US and British Virgin Islands. I'm a long time sports fan, and my favorite teams are the Boston Red Sox, the New England Patriots, and the Boston Bruins.